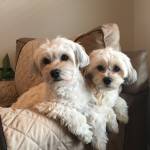 Linh B Fairfax, Virginia | March 23 2020
Tommy is great!! He helped us with our puppies when we first brought them home. Came over & helped resolve jumping, whimpering & nipping issues. He's always available to give us advice through email too. Would definitely recommend him to anyone looking for assistance with their fur babies. Permalink
Bark Busters dealt with Chewing, Jumping up, Other, Puppy management 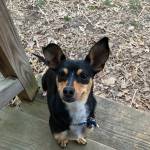 Sarah M Manassas, Virginia | March 19 2020
We adopted our small dog from the local shelter and brought her home to her new family with my spouse, 2 children, 2 senior cats. She didn't have any obedience training and we immediately started it but it was tough, she wasn't responding in many instances. Her biggest issues were separation anxiety, nipping at the kids, pulling on the walk and chasing the cats. Then she began peeing around the house. I felt like I was losing the battle even though we felt successful with our previous chihuahua of 10 years and read all the training books. A friend recommended bark busters and Tommy came in and immediately set the record straight! We realized we had not been claiming objects, people and territories around the house. The techniques worked and she responded instantly. We kept up with the homework and all of the family worked with our new pack member. She never marked once more in the home in the past month! She did a complete 180. She now walks calmly on the leash 98% of the time, she doesn't bark in her crate when we leave for an hour to go to the store, she gives us space and she stopped chasing the cats and nipping at the kids. We have seen an immense improvement and can't wait to spend the next decade with our cute new family member! Thank you Tommy! I have told all of our friends about Bark Busters. Permalink
Bark Busters dealt with Pulling, Recall, Separation anxiety, Toileting

Jade M Manassas, Virginia | February 10 2020
When we moved from another state I was worried how my dog would handle the transition and how her history of aggressive behavior would come out. I contacted Tommy about a month before my move and he scheduled to meet us soon after we arrived. I was skeptical but there was absolutely no need! Tommy was incredibly patient and took the time to explain to me not only what he was doing but why so that I could continue to do the same. He showed me a great way to introduce my dog to strangers (an area of significant difficulty for her previously), as well as how to alleviate her fears and desire to protect me around others. He even helped me with her walking and now walks are enjoyable for both of us! I never thought I’d be so confident introducing my dog to new people but Tommy really gave me the skills to do so and continued to check in along the way! I’m so glad I called Tommy and would highly recommend him! Permalink
Bark Busters dealt with Aggression, Pulling, Separation anxiety

Whitney H Burke, Virginia | January 16 2020
My husband and I contacted Tommy after our dog had an unfortunate incident involving a neighbor's dog. My husband was wary, as another training program we had used for our older dog made him feel judged and looked down upon, in almost a "how could you let your dog get this way?" kind of vibe. Within the first ten minutes of meeting Tommy, I knew this was going to be a totally different experience. We felt absolutely no judgement from Tommy. He never made us feel irresponsible, dumb, or less than. in fact, he truly has the gift of quickly figuring out what types of examples you could personally relate to when explaining dog behavior or training techniques. We are both high school teachers and he quickly modified his examples to be things like, "so if a student gets out of his seat when he's not allowed to, what would you do?" It put the concepts into a psychological space that we could directly relate to and made it easier to understand, and then ultimately, remember. Tommy has met with us multiple other times and has always let what work needs to be done dictate the amount of time he spends with me. I never feel rushed nor do I feel silly asking questions or having Tommy demonstrate things for me. He is constantly accessible when I need help, and has gone out of his way to help me with my pup. He is absolutely invaluable and I couldn't recommend him more highly to anyone who is in need of help with their dog. Permalink
Bark Busters dealt with Aggression, Barking, Jumping up, Pulling

DeeDee C Montclair, Virginia | December 21 2019
Tommy is AMAZING!! You definitely can see the difference after the first session! He definitely not only works with your dog but with you so that you understand EVERYTHING! It's been a month since our first session and Tommy has been checking up ever since! You can tell he really cares about the relationship between the owner and their dog. If you haven't done Bark Busters, then you don't know what you and your dog have been missing! It was a great learning experience for my dog and me, and I am so thankful to Tommy! Permalink
Bark Busters dealt with Hyperactivity, Jumping up, Pulling, Separation anxiety

Lindsay B Fairfax, Fairfax (city), Virginia | October 09 2019
Penny had basic commands, but my husband and I were struggling with getting to that next level of good behavior. She would pull on the leash, jump up on people, dig at our couches, and had no personal boundaries when guests sat down - things we didn't know how to approach training. That's when we found Tommy. It was amazing watching him interact with Penny as he got a feel for the type of dog she is and figuring out her quirks. He also talked through everything he was doing with us, so we could understand and learn ourselves. Within one lesson, Tommy taught us how to better communicate with Penny, and helped us with every issue we addressed. We could finally take covers off of our couches, I can easily walk my 60 pound dog, and she doesn't jump or get on people. Tommy is very professional and friendly, and is an incredible trainer. He was just the same when I emailed him following the in-home training with a couple of questions, and I know I can reach out to him anytime we need to. I'm going to get Tommy to help us with every dog we have. I can't recommend him enough. Permalink
Bark Busters dealt with Digging, Hyperactivity, Jumping up, Pulling

Deanna F Haymarket, Virginia | August 25 2019
We were so pleasantly surprised at the difference we saw in our dog in just one 3-hour visit from Tommy. Our recently adopted 1-year old lab mix pulled really badly on walks and was overly excitable all of the time, especially with guests. We tried a pet store group training class, internet searches, and training videos, but nothing was working to calm her down. After just one session with Tommy, she was a completely different dog. He taught us how to get her to calm down and pay more attention to what we were asking. She's better on walks and we're also able to stop her from jumping on guests. All of this was accomplished without treats! I had read the reviews and was skeptical that one session could really make a difference, but I'm glad to say I was wrong. The methods really work! Permalink
Bark Busters dealt with Hyperactivity, Jumping up, Pulling

Karri Q HAYMARKET, Virginia | July 12 2019
I am so happy with the progress my dog has made since working with Tommy and Bark Busters. My pup is a large mutt - hound, lab, pit, pointer - a lot of hunting instincts in one 80 lb stubborn boy. We tried other in home trainers when he was younger, and while he learned some things, at 2 years, I was still left with a big, strong dog who pulled hard during walks, tried to chase squirrels/bunnies, and jumped on people in the home. Those trainers stopped working with us after he was out of "adolescence" so I was left on my own. I signed up with Tommy after my pup almost knocked me over to get to a squirrel one day. I needed help! After the one session with Tommy, there were immediate changes. To see the results that day was amazing. I have to say though, that it still takes work and commitment. There's no magic button. Tommy gives you the tools to work with your dog and while there were immediate results, we have to keep working to keep him on track. It's amazing though when I'm walking with my dog now, and he's walking right next to me - occasionally looking up at me. Where in the past, he was pulling my arm out of the socket, hunting for squirrels and good smells, as if I didn't exist on the other end of the leash. I really appreciate that the method doesn't require electrical shocking my dog or any other pain. Treats didn't work on my dog either, as a tasty squirrel looks much yummier than my treat. It's not just walks either, his in home behavior has improved so much as well. Much less jumping on anyone, and easily corrected if he screws up. And when the doorbell rings, I'm actually able to open the door now! Tommy has continued to be supportive in the process as well. He's so responsive when I reach out via email with a question or new issue to address. He checks in periodically too. It's nice to know I have lifetime support now from an amazing trainer who clearly loves what he does. Can't recommend Tommy and the Bark Busters method enough! Worth every penny! Permalink
Bark Busters dealt with Aggression, Barking, Jumping up, Pulling, Recall

Doug and Rachael P Haymarket, Virginia | March 12 2019
We have a two year old female Golden Retriever that struggled mightily during walks (pulling) and barking at things outside of our house. Tommy came in and spent a few hours showing us how we can change our overall outlook toward her, which has drastically decreased her anxiety. When on the leash walking outside with these new tactics, Tommy had her calm and walking right next to him WITHIN SECONDS. He also leaves you with homework and takeaways that you can continue to work on. We would highly recommend Tommy if you have a pup that needs some direction and structure. He's great! Permalink
Bark Busters dealt with Barking, Hyperactivity, Pulling, Separation anxiety

Kerry R Centreville, Virginia | December 10 2018
I highly recommend Bark Busters Fairfax. Tommy Meyerhoeffer is an excellent dog (people) trainer and was prepared and professional during our home training session. We have two hound dogs, one of which was a nightmare to take on walks because of her natural hunting instincts. Before Tommy left on our very first day of training our sweet girl was walking by my side and catching on quickly to what I wanted her to do. Be prepared - the success of ongoing training is fully in the owners hands! Tommy spent the time with us to teach us about the natural instincts and thought patterns of dogs, and this has helped guide me during our "homework" time. Permalink
Bark Busters dealt with Barking, Pulling, Recall