Rolande B Marco Island, Florida | March 08 2018
Quick response to e-mail explaining present situation and good immediate suggestion to help resolve the "pulling". Now, 5 days later, remarkable progress. Permalink
Bark Busters dealt with Barking, Jumping up, Pulling
Trainer note from John and Elizabeth : We had trained this lady's previous dog several years ago, so were pleased she chose to come back to us to help her train Maya.
See more reviews for John and Elizabeth

Sarah and David N Portland, Oregon | March 08 2018
With the very first session, first "drill" my dogs responded and recognized the changing of leadership! I was so proud of them. I had no idea they were capable of being trained. I trust Dick's word that my consistent work will pay off. Permalink
Bark Busters dealt with Barking, Chewing, Jumping up, Pulling, Recall
See more reviews for Dick 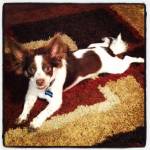 Susan Y Foothill Ranch, California | March 07 2018
Working with Lisa changed my LIFE!!! We have had aggression toward larger dogs (on leash) problems with Kupenda for over 5 years. I NEVER looked forward to walking him. EVER. After the first session, I admit I was not only a bit skeptical but also a bit discouraged with the amount of 're- training' needed for me and my family (4 men). Lisa knew that walking him was our biggest issue and offered to have our second session only a few days after our first. This lesson was life-changing and miraculous. I cried and hugged Lisa after this session as we were able to successfully walk Kupenda past 2 large dogs without him 'freaking out.' I highly recommend Lisa!! She is professional, highly skilled and knows her stuff!! My friends and neighbors can not believe the change in our dog. She is BEYOND amazing! Thank you, thank you, thank you, Lisa!!!! Permalink
Bark Busters dealt with Aggression, Pulling
Trainer note from Joshua : You're welcome, Susan. Your love for Kupenda and your great follow through with BB instructions made a HUGE difference. I'm looking forward to helping you with your new puppy when she arrives, also. I loved you remark, during a lesson, that now you love to challenge your dog and look for big dogs on your walks!
See more reviews for Joshua

Stuart R Henderson, Nevada | March 07 2018
Before signing on with bark busters I read these rave reviews and was skeptical, primarily because my husband and I never had good experience with dog trainers. We only knew the click, treat, repeat type of training which was simply superficial and limited. We hired bark busters--Derek came to our house the beginning of February and gave us real tools that work. Our older aggressive dog is responding to the techniques we learned and our new puppy is learning to behave. Specifically we have taught them to walk on leash without the pulling, to stop rushing to door, to come when called--not just when we have food in our hands. If you work the program you will get results. Permalink
Bark Busters dealt with Aggression, Barking, Pulling, Puppy management, Recall, Toileting
See more reviews for Derek and Lissette

Joan S Milford, Connecticut | March 07 2018
This training is very informative and easy to learn. Practice is the key the instruction is written out and demonstrated. Permalink
Bark Busters dealt with Barking, Sibling rivalry
See more reviews for Michael

Steve & Marne' M Oviedo, Florida | March 07 2018
Awesome experience - have lots of hope that Rocky's behavior will calm down as well as his whining when we leave him Permalink
Bark Busters dealt with Barking, Jumping up, Pulling, Puppy management, Recall, Separation anxiety
See more reviews for John

Damaris A Debary, Florida | March 07 2018
It was easy to learn and quick to pick up on. Recommend for anyone wanting a better trained dog. Permalink
Bark Busters dealt with Barking, Digging, Jumping up, Other, Pulling, Puppy management
See more reviews for John

Irene W San Diego, California | March 07 2018
This has taken me an embarrassing amount of time to finally write this review, but better late than never! We have a small 16 lb. mix (Duke) who started turning into an absolute terror after I moved to San Diego. He would start barking at noises outside our door, would lunge at other dogs on our walks, and be aggressive in general toward people he didn't know. I can't even explain how stressed it was making me to take him outside of our apartment -- I was always anticipating someone wanting to pet him or walking by another dog, and having him lose control. After researching as many trainers as I could find I decided Justin sounded like he would be the right fit, and he did not disappoint. Before Justin arrived I assumed this would be an uphill battle with multiple meetings but I could not have been more wrong. Justin showed up to meet with Duke and I one day and he explained to me that it was more of a fear aggression that was happening and that really he's just a big softy. I realized we needed to focus on how we interact with Duke to get him into a place where he's not so fearful. Justin taught me how to work with Duke and gave me the tools to succeed even when he's not there. I was even able to easily communicate to my boyfriend (who was unfortunately out of town that week) how we should be working with Duke going forward. In ONE meeting Justin was able to help me understand and control the situation. If you ask anyone who knew Duke right before meeting with Justin, they would tell you the difference is night and day. We still need to implement the tools Justin gave us to work with Duke when he starts getting stressed, but for the most part, it's smooth sailing. We are SO grateful for Justin and I cannot recommend him enough. Permalink
Bark Busters dealt with Aggression, Barking, Hyperactivity, Jumping up, Other, Pulling
See more reviews for Justin