Your trainer is Risto Deinlein, click here to select another trainer 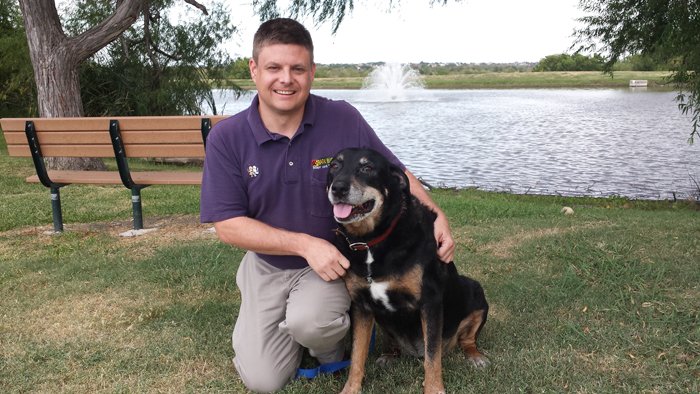 Risto Deinlein grew up in North Carolina and knows how important a happy dog is to a family. Having been raised in the company of three incredible Labrador Retrievers, he really understands what a dog wants out of its family/pack. From leadership and discipline to love and affection, Risto can help you find and fix the problems that are blocking you and your dog from having a relationship that is fulfilling for the both of you.

Risto moved to the Dallas area to attend college and found himself at home in Texas. After graduating from college, he spent several years working in the advertising industry. Although he enjoyed his work, he never felt like he was improving others lives in the way he desired.

After a family member found the solution to a problem puppy with the help of a Bark Busters trainer, Risto became intrigued by the company and its mission statement. After researching what he would have to do to become a trainer himself, he decided to make the career change. Here was an opportunity with a company to not only help his community but also to spend time with one of his greatest loves: dogs.

Risto then met the lovable two-year-old Rottweiler, Dillon, and he knew he had made the correct choice about his life. Now with his faithful companion at his side -- or in the backseat of his car -- Risto Deinlein is proudly helping families and their dogs throughout Denton County, Texas.

So far so great! Only one training sessions and i am already seeing behavior changes!!!

I was nearly in tears when I finally sat down and wrote an email to Barkbusters. I adopted a puppy from a very large litter that was a "Breeder Accident". She is half Australian Shepherd (hence the name Maloo, the Aborigine word for thunder), and half German Shepherd. She was the runt of the litter and the cutest thing! My youngest son and I fell i...

Risto has been great! He has met with me and my Australian Shepherd (Rose) several times and the training has been really effective so far. He has been willing to meet at parks and trails in order to work on Rose's problem areas and he has given me the confidence to be a true leader for my dog and make a lasting difference in Rose's behavior. I def...

We have just begun to work with Risto, our trainer. We were totally amazed on the first visit on the techniques he used. In only one visit so far, we can already see the difference in our "student." We know we have a long way to go, but already see that we made the right choice in going with Bark Busters. We are fortunate to have Risto and look for...

Wow!! We didn't think training could be easy and fun. We have four dogs, two cattle dog mixes and two very strong willed doxies. We have tried so many techniques to correct barking door behavior and leash aggression, all with little success. Risto, our Bark Buster trainer, identified the mistakes we were making and taught us how to change our behav...

Mr. Risto Deinlein, From the first time in the door he was able to identify several issues, especially with our older dog, and immediately started showing us ways to correct and work on his behavior. His approach of training us how to have a better working relationship with our pets has made them happier members of our family. As it is still a w...

Risto is awesome! He taught us so much about our dogs and how to communicate with them. He helped us to understand the power struggle that was going on with them. It made a big difference with how we interact with them and deal with issues. Our girls are stubborn, and he has had to come back a few times to give us refreshers, but that's all include...

Quick results! After going through previous training courses with our dog, from board and train to in home training, we have finally discovered the secret with Bark Busters. Risto has a great understanding of dogs and worked patiently with my husband and I so that we could better understand our dog as well. Our dog, Amy, has learned to relax and al...