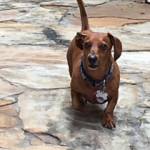 Sandie W Huffman, Harris, Texas | October 08 2018
Amazing - I never thought anyone could help us with our 12 year old rescue dachshund being so dominant in the house. Lexie came in our home and within 1 hour we could see a tremendous difference in his behavior. It has only been a couple of days since her initial visit and Bonzo is a different dog. He no longer attacks the front door when the door bell rings; nor does he incessantly bark at nothing. I can take him for walks and he does not try to attack every person or animal he sees. Walks were impossible before her visit. Her techniques are fantastic. We work with Bonzo every day and every day he is becoming a more pleasant dog due to Lexie showing us the way. We are so pleased we contacted BarkBusters - Lexie Roberts. Thanks so much!!!! Permalink
Bark Busters dealt with Aggression, Barking, Other, Pulling, Recall, Sibling rivalry
Trainer note from John and Lexie : The Wheelers were a pleasure to work with! They are seeing lasting results because they are diligent about reinforcing what they learned through continued practice.

Elizabeth V Spring, Texas | March 10 2018
We're still a work in progress. But Keeper is a changed dog, it's amazing. Lexie was extremely helpful, knowledgeable and fun. The techniques she shared with us and the props have been so helpful. We are so happy we called Bark Busters to help us turn our hellion in to an angel. Permalink
Bark Busters dealt with Aggression, Chewing, Jumping up, Puppy management
Trainer note from John and Lexie : Elizabeth & Bob have seen results with Keeper, not only because of Bark Busters' techniques, but because they've spent the time working with him and practicing the techniques. They're a pleasure to work with.

Betty W New Caney, Texas | March 23 2017
Lexie Roberts is the creme de la creme of canine training. She is an earthbound patron saint of dog handlers. Aside from impeccable appropriate appearance and excellent, punctual, business practices her demeanor is that of a lovely person you are proud to know. The dog training sessions cover a tremendous amount of ground (pun intended!ðŸ˜‰). Most prepared with tools of the trade in hand Lexis gets down to serious training business immediately. Subject and master are interactive successfully. No tricks to this trade: just her hard work, expertise to perfection and a wonderful experience at all times. Four paws up!!!ðŸ˜€ Permalink
Bark Busters dealt with Puppy management

Brenda K Montgomery, Texas | January 27 2017
We have two Pomeranians. One we just got was a rescue. Our vet believes she is 3 and her name is Boo. She had been abused and kept caged for 12-14 hours a day. She was very aggressive when we got her and had the fear she would bite someone. Our Vet recommended Bark Busters and Lexie came and gave the first lesson. Within an hour she had Boo responding to the corrections. It has now been a month and Boo is like a different dog. Although she still does not trust strangers once I give the correction she responds immediately. I am so impressed with the way that Lexie works with the dogs and how they respond. I would strongly recommend Lexie and Bark Busters to anyone. Permalink
Bark Busters dealt with Aggression, Barking, Hyperactivity, Separation anxiety

Blake Y Willis, Texas | November 10 2016
We adopted Callie from the animal shelter as a 7 pound puppy in late July. Her mom had been a pregnant stray and had given birth to 8 pups at the shelter so a concrete floor and crowded cage was the only life Callie had known. When we brought her home she very laid-back and relaxed. Within 3 weeks, she had become very hyperactive and aggressive, biting us hard when angry or playing. Callie also wanted our 12 year old German Shepherd mix to play roughly with her and was constantly bothering her. Callie was obviously very strong-willed, intelligent, and independent, and a DNA test determined that she was a coon hound mix along with other mixed breeds including Akita. Coon hounds are working dogs known for their high energy level, and we realized at that point that she was also going to be a large dog. We were beginning to have fears of whether or not she would ever be manageable enough to live in our home, and neither my wife nor I had ever had a pup with her personality. When we mentioned her rambunctious misbehavior, people would scoff and say she was "just a puppy" but it went far beyond that. Our veterinarian recommended Bark Busters and the training has helped immensely. At the age of 4 months Callie now weighs 38 pounds and is still growing. We work with her at home and take her to doggie day camp 3 times per week so she can socialize and play with other dogs in her age group. We also walk her twice a day so she burns some of that high energy naturally. She still has her moments, but from the first day of starting her Bark Busters training, she became part of the family. We love her and enjoy her very much these days. Permalink
Bark Busters dealt with Aggression, Jumping up, Pulling, Puppy management, Recall, Sibling rivalry
Trainer note from John and Lexie : It's such a pleasure working with these owners who are committed to training their active puppy!

Dee and Mary R Montgomery, Texas | August 25 2015
Lexie Roberts was an excellent trainer for us and our dogs. She spent three hours the first visit discussing our problems. She demonstrated remedies for our two darlings. For example, both dogs loved to race to the front door whenever the doorbell rang and proceeded to bark as well as jump upon those entering. Lexie helped us solve this problem very quickly. Also, one of our dogs lovvvvves socks and doesn't like to return them to their owner. Again, Lexie suggested a tradeoff using a frozen meatball in exchange for the sock(s). Also, one of the dogs did not like to take walks at all. We were shown how to use a training aid to keep her walking as opposed to rolling on her back on the road or grass. Lexie also suggested purchasing a Thundershirt for our dog that is very afraid of storms. We love "Bah" a term Lexie taught us and both dogs recognize as a "No"! We loved her and have recommended her to others. Permalink
Bark Busters dealt with Aggression, Barking, Chewing, Digging, Jumping up
Trainer note from John and Lexie : I really enjoyed working with these ladies and their dogs. They love their dogs and were committed to practicing what I taught them consistently, so that they could achieve the results they were after.

Staci P Spring Texas, Texas | October 06 2014
I am so very pleased with the results of our 6 month contract, not only did we get fantastic techniques that were insightful and easy to follow, but when I would ask our trainers to repeat the training instructions again so that I could really understand them, John and Lexie were patient and took extra time to make sure I understood! My dog, Hans has had a 100% complete turn around from an aggressive dog towards other dogs to a dog who has a "room mate" and a new buddy! I have recommended John and Lexie to several of my friends who are struggling with their dogs!!! Thanks John and Lexie for all your knowledge and willing to train us as parents to have a dog who follows commands and is NOT aggressive to his new roommate! Permalink
Bark Busters dealt with Aggression, Other

White E Montgomery, Texas | May 06 2014
I was so frustrated with my dog's behavior and just didn't know what to do. Lexie explained how a pack works which really opened my eyes. It was so exciting to see him respond once I started to speak his language. Thank you, Lexie! Permalink
Bark Busters dealt with Aggression, Hyperactivity, Jumping up, Pulling, Recall

Humble | February 15 2011
I am so happy with the results of the training that John and Lexi provided. Hank has always had a special place in my heart but now I think everyone in the family sees him differently. He is a changed dog. When I called John & Lexi, we were at the end of our rope and didn't know what to do about Hank's aggressive and needy behaviors. He was definitely the pack leader. Now, we have the skills to teach Hank in a way that he understands. I couldn't have asked for more :) Permalink

The Woodlands | June 30 2008
The training worked so well I'm tempted to pay to have my neighbor's dog trained. Permalink