Does your Dog Show Signs of Compulsive Behavior?

Does your dog show signs of compulsive behavior? He may be suffering from a condition known as Canine Compulsive Disorder (CCD). Bark Busters can help! 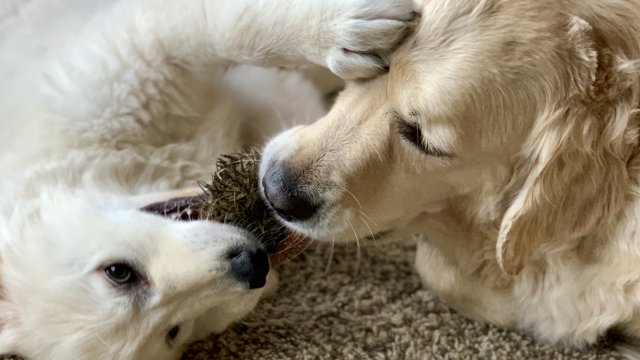 Does your dog show signs of compulsive behavior? He may be suffering from a condition known as Canine Compulsive Disorder (CCD). Similar to Obsessive Compulsive Disorder (OCD) sometimes seen in humans, CCD in dogs causes them to repeat behaviors to extremes that are not normal. Sometimes the condition is so severe that dogs end up injuring or maiming themselves to the point where they require veterinary treatment.

Examples of CCD behavior include:

It does seem that certain breeds are more likely to show certain types of compulsive behavior than others, but this does not mean that all dogs of a certain breed will be affected.

As with all aspects of behavior, much depends on the personality of the dog, together with the environment in which he lives, and his daily food and exercise regiment. Dogs often develop compulsive behaviors to cope with stress, anxiety, or a lack of exercise, mental stimulation or nutrition. It is always worth speaking to your vet to eliminate the possibility of neurological, orthopaedic, or other medical disorders.

As owners, we need to ensure that we don’t encourage compulsive behavior by laughing and/or cheering on actions or manners that look or sound cute in puppyhood, but which can become unwanted and unhealthy as a dog grows. For example, never play light or laser-chasing games with your puppy, don't encourage your dog to bite his own feet, be sure not to praise your pup for barking at nothing at the stage when he is finding his voice.

If you find your dog acting out, no matter the reason for the behavior, react quickly! Allowing behaviors or praising your dog will enforce acceptance and sometimes the behavior becomes chronic.  Partnering with your Bark Busters trainer, put in place some exercises and behavior modification tools to help stop the unwanted actions - and stop the compulsive behaviors. Early intervention is important.

As always, reach out to your local Bark Busters training for assistance and guidance!