Jamie T Los Angeles, California | February 01 2020
10/10 WOULD RECOMMEND!!! I just had a 3 hour session with Christen and Kevin with my dog, Hudson. He's an approximately one year old Boxer/Staffie mix who was rescued from the streets of Venice Beach. I have had him for almost 4 months now, and although he has come a long way since I got him, he still needs a lot of help with his fears. During this session, I learned how to communicate WAY better to him in a way he could actually understand. He immediately started responding to their techniques and lessons. I could not be more proud of Hudson and can not thank Christen and Kevin enough, even after only one session. I can't wait to do our homework and watch him grow even more. Permalink
Bark Busters dealt with Aggression, Barking, Jumping up, Other, Pulling, Recall, Separation anxiety

Mateja B Los Angeles, California | December 27 2019
We’ve been with Kevin and Bark Busters for over 3 months now for two 5-year-old boys who struggle with dog aggression and some general obedience. After getting the basics down and establishing command, we’ve seen dramatic improvement in their behavior. Kevin is patient, kind and explains everything thoroughly. He truly teaches you how to establish a connection and a dialogue with your dog that isn’t about yelling or punishment, it’s a whole new way of thinking about the relationship you have with your pet and it really works. The boys are still making drastic progress every day and we couldn’t be happier with Kevin! Thank you!! Permalink
Bark Busters dealt with Aggression, Barking, Jumping up, Pulling

Cassie D Los Angeles, California | December 22 2019
We've been with Bark Busters for a few months now, and we've already seen dramatic improvement with our two boys. Our behavioral therapist, Kevin, has been great from the beginning. He explains things easily and without ever talking down to you, and because of him we have a better understanding and better relationship with our dogs. They're less anxious and more trusting, and happier than ever. I couldn't recommend Bark Busters enough. Permalink
Bark Busters dealt with Aggression, Barking, Jumping up 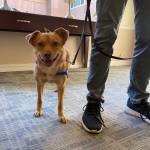 Andrew C Hollywood, California | December 20 2019
Kevin and Christen have helped me and my dog Ginger come to a more peaceful household. First they came to the house so we could work with Ginger in her space. Ginger wasn't super into strangers being in her house at first, but they were calm and let her adapt. The first part of the training session was more to do with the hows and whys their method works. Kevin and Christen are very informative, and basically they teach you a language (both body and verbal) that your dog can understand. I was allowed to ask all the questions I needed to feel comfortable with actual training. At first in the training you might feel a little goofy talking dog. Fortunately you are in your own house and everyone is doing it. We repeated the training exercise until Ginger and I were on the same page. Next we moved on to tackle the outside world. Kevin and Christen provided a special harness and other training tools that are humane, safe, and non-painful. Overall we worked for about 3 hours and the training tools stayed with me and Ginger. What I like is that I free like I have a way to talk to my dog that doesn't feel like I'm yelling all the time. This is not a treat based program, but rather a trust exercise to get you and your dog into a team. Thanks Christin and Keven! Permalink
Bark Busters dealt with Aggression, Barking, Pulling, Separation anxiety

Jonny S Los Angeles, California | December 18 2019
I reached out to a family member upon getting my puppy Mochi because she was more than a handful. She told me she had heard Bark Busters was the best in the business. Then I met Christen and Kevin and I can wholeheartedly say I don’t know where I would be without their guidance in raising my dog. I rescued a 2 month old Maltese puppy, and immediately upon arrival she owned me. Mochi would use the potty only in the house and never outside, would chew up and destroy everything in site, and the would never listen to me. After their first visit, I called my girlfriend the most calm I had been in months. I had Mochi completely under control and felt the first sense of a strong owner and dog relationship. Throughout the past few months they have provided so much help with her diet, going on walks, and most recently her separation anxiety. Every time an issue has risen up, I’ve had no doubt that Christen and Kevin would have a solution. Time and time again they’ve shown up with great tactics that yield super fast results. They are also such kind people and care deeply about the work they do and the animals they work with. So lucky to have found them and hope many other families will as well :) Permalink
Bark Busters dealt with Hyperactivity, Puppy management, Separation anxiety, Toileting

Gloria S Los Angeles, California | December 11 2019
Kevin was a huge help in training both me and the dogs! He goes very in-depth with every concern I have and I definitely am making very good progress with them. He's always available to training sessions and very knowledgeable! Highly recommend! Permalink
Bark Busters dealt with Chewing, Hyperactivity, Pulling, Separation anxiety

Monty B Granada Hills, Los Angeles, California | October 26 2019
Wow! What a difference ONE lesson can make. If you've been hesitating getting your dog trained, putting up with barking, jumping, poor door manners and counter surfing, call these two. They will show you how to fix this by changing the way you interact with your dog. No harsh methods is what I love. I put up with my dog's bad habits for way too long, but now Petey and I are on the right track. Petey actually listens to what I say. Refreshing! Permalink
Bark Busters dealt with Barking, Jumping up

Monty B Granada Hills, Los Angeles, California | October 26 2019
Wow! What a difference ONE lesson can make. If you've been hesitating getting your dog trained, putting up with barking, jumping, poor door manners and counter surfing, call these two. They will show you how to fix this by changing the way you interact with your dog. No harsh methods is what I love. I put up with my dog's bad habits for way too long, but now Petey and I are on the right track. Petey actually listens to what I say. Refreshing! Permalink
Bark Busters dealt with Barking, Jumping up

Brittany S Los Angeles, California | September 29 2019
Kevin gave my husband and I some fantastic lessons and advice for our 2 year old beagle mix, Smokey. He spent 3 hours with us going through dog psychology and helping us address basic behavioral issues, such as barking at strangers, exerting more control while on walks and establishing boundaries. He also shared some great training tools and toys. I highly recommend Bark-busters! Their tips and advice are fact-based and they actually work! Permalink
Bark Busters dealt with Barking, Other, Pulling

Joy B Los Angeles, Los Angeles, California | August 04 2019
I have two dogs, Lucy & Leo. Lucy is a Pit bull that we have had for 5 years and Leo is our newly adopted Pug. We have had him for about 4 months now. Over the years, I have taken many dogs to private training. I have never seen any training be so effective and so quickly. I am truly amazed! This training is so unique. Christen showed me how to be respected by my animals, and looked at as the leader. I feel a sense of control now. No training that I have experienced has done this. I am so excited to continue this training and see the progression. Christen is very knowledgeable and so good with the dogs! Permalink
Bark Busters dealt with Barking, Pulling, Puppy management, Separation anxiety, Toileting