Bethany C Fort Collins, Colorado | August 23 2021
Carol is amazing!!!! She spent a great deal of time explaining to us the bark buster method. Just within one session she helped us help our boys from slowing down on the barking. Who would have thought that BA was such a magical word? I am looking forward to working with her to learn more tricks of the trade. Permalink
Bark Busters dealt with Barking

Michele E Windsor, Weld, Colorado | August 22 2020
Champion is a fitting last name for Carol with Fort Collin’s Bark Busters! We have been working with Carol for training with our 10 month old Bernedoodle. The progress can be seen during the first session. Subsequent sessions enhanced and refined our understanding of a dog’s natural instincts and desire to please the owner. She came to our son’s house for training with our 6 & 8 year old grandchildren. Spectacular results! I highly recommend Carol CHAMPION for awesome dog and people training! Michele and Robert Ellis Permalink

Robert E Windsor, Weld, Colorado | June 09 2020
We have worked with Carol for two lessons at this time - we have found her knowledgeable kind and helped us to understand that the training was really for US !! We are so pleased that we called her - the difference was noticeable after the first session - I would highly recommend Carol over larger group sessions !! Permalink
Bark Busters dealt with Barking, Jumping up, Pulling

Mary P Fort Collins, Larimer, Colorado | December 23 2019
I was originally worried that Mandy was too young to be tried at 6 months -- I was so wrong! Come to find out that was the perfect age -- before the bad habits start. Carol is PHENOMENAL! Carol offered great training advice for bother Mandy and I. When I started looking at trainers I was nervous thinking that Mandy would love us less because we started instilling boundaries but what Mandy taught us was to communicate with Mandy. Not punish but to communicate with her like her dog parents would. Totally dog friendly and even Mandy is grateful because now she understands what we want. Permalink
Bark Busters dealt with Barking, Chewing, Jumping up, Pulling, Puppy management, Recall, Toileting

Jessie P Fort Collins, Larimer, Colorado | May 18 2019
Carol has been so amazing to work with! Our dog Zoey was in an unfortunate dog fight which caused her to not trust any dogs and bark aggressively at them. She was pulling on the leash and not listening. We could no longer trust our dog and our dog was obviously having so much stress and trauma after this dog fight. We have only had two sessions so far with Carol and the changes we have seen in our dog has been amazing! I can now take her on a walk without being pulled by my dog and she seems to be happy again! I never thought we would see the changes that we have in such a short period of time. I am so excited to keep working with Carol. She's amazing!! Permalink
Bark Busters dealt with Aggression, Pulling, Recall

Heather P Loveland, Larimer, Colorado | October 23 2018
Carol did an excellent job explaining the Bark Buster methods, as well as why and how they are effective. After the first training we noticed Oliver learning to work things out and finally realizing I'm in charge. It can be frustrating to see Oliver react differently with Carol vs us but she has been great at teaching us to be the leaders. We know that the process will take time but even in the first 3 months we've seen a change in Oliver. Permalink
Bark Busters dealt with Barking, Chewing, Hyperactivity, Jumping up, Pulling, Recall, Separation anxiety 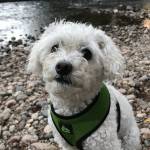 Rachel H Fort Collins, Larimer, Colorado | September 13 2018
When I first contacted Carol I was incredibly stressed out and embarrassed by my mini Poodle, Percy, who would not stop barking. We had moved into a new apartment building and my neighbors were very unhappy with Percy's behavior. Percy barked excessively at the visitors coming to my door and especially on walks. My main concern was finding a trainer that did not use aggressive or harmful techniques such as shock collars. Carol has a unique, non-harming approach to training. She has taught me to take control of each situation by using non-harming physical cues and verbal commands which has taught Percy to be less reactive and thus quieter. I am so relieved that each time I meet with Carol I see progress with my little buddy. Carol is calm, confident, and effective in everything that she does. I could not have asked for a better trainer. I highly recommend Carol to any pet owner suffering from excessive barking and seeking relief. Permalink
Bark Busters dealt with Aggression, Barking, Pulling

David S Fort Collins, Colorado | December 15 2017
Carol spoke with me on a couple occasions over the phone, I was having issues of severe aggression on rescue German shepherd. I have rescued several golden retrievers over the years and through the conversations with Carol we decided to return him and get another golden. I now have a very loving 2 year old boy and we are very happy with our decision due to Carol's advice she never asked for any payment and our life is so much happier I would recommend Carol to anyone who needs help with their furry friends, she definitely changed my life for the better! Permalink
Bark Busters dealt with Aggression

Tracey H Fort Collins, Colorado | March 27 2017
Carol has been great! Apollo, a 75 lb 8 month old German Shepard male came to me to foster for a "while" at 3 months old. I hadn't worked with him as far as much training goes because the person I was fostering for was supposed to do the training until he was able to keep him at his home. That never happened and he is now my dog. So now I had a large puppy that was out of control a bit. I have two very old dogs at home and this (very large) puppy was causing problems. Fence fighting, trying to dominate one of my older dogs and barking incessantly when left outside and digging holes and being the boss of the house and separation anxiety. He is a VERY loving puppy, but I felt out of control with him. Carol has reinforced my confidence to train him, and has shown me some great training without treat rewards and physical harm. Positive reinforcement/voice control works wonderful. I have never used physical harm/discomfort in training ever, and would never. I have used treats in the past. Apollo is very smart and is responding extremely well! He responded immediately to Carol the very first time we met with such respect for her! Now he is doing the same with me. We continue to train and make forward progress! Permalink
Bark Busters dealt with Barking, Digging, Puppy management, Recall, Separation anxiety, Sibling rivalry

Becky B Windsor, Colorado | November 02 2016
I have been very pleased with the training received from Carol. Gunner (Goobs) is now letting me take him for a walk instead of the other way around. The WaggWalker works great. What a joy it is to not be pulled around! I'm looking forward to continuing our training on recall. Thank you for your patience, Carol! Permalink
Bark Busters dealt with Barking, Jumping up, Pulling, Recall