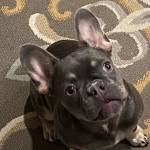 Dina D Holtstville, New York | February 12 2021
We had one lesson only with Jason Molfetto. I am so surprised at how quickly my 7 month old puppy, Tilly, is adapting to the techniques that Jason taught us. By the end of the night she was more exhausted than I have ever seen her. He was professional, friendly, and very knowledgable. We have been doing our "homework" each day and Tilly is listening better than ever. She is even starting to lay in her crate herself, something she would never do until Jason showed us how to have her adapt. I highly recommend Bark Busters and if you live on Long Island, highly recommend Jason. I hope we don't need any follow up classes, but if I do, I would definitely call Jason again. Permalink
Bark Busters dealt with Chewing, Hyperactivity, Jumping up, Puppy management, Recall, Separation anxiety
See more reviews for Jason

Kayla C Tyngsboro, Middlesex, Massachusetts | February 12 2021
Bonnie is the best! I have a very energetic goldendoodle who loves food. He would jump on top of our counters and open the trash. We actually had a couple of scary situations where he ate things he shouldn't have but luckily he was ok. He also would pull me on walks. With Bonnie's help my boy is now respectful and has boundaries. We can both enjoy our walks together now too. I love that she does not use shock collars either. I highly recommend Bark Busters! Thank you Bonnie! Permalink
Bark Busters dealt with Barking, Chewing, Hyperactivity, Jumping up, Other, Pulling, Puppy management, Recall, Separation anxiety
See more reviews for Bonnie

Ben M Lowell, Middlesex, Massachusetts | February 12 2021
Bonnie is the real deal! We had tried other training techniques with our 3 year old rescued Dachshund and were struggling to get our desired results. He had major separation anxiety and was always barking. We found Bark Busters and couldn't be any more thrilled. By the point we were 30 minutes into the lesson, I knew she was AMAZING! She is the trainer we had been looking for. The best part is she actually trained us on how to train our dog, so we are seeing the same results as when she was here. Thank you Bonnie for saving our family with Skeller, and restoring harmony in our home. Highly recommend! Permalink
Bark Busters dealt with Aggression, Barking, Jumping up, Pulling, Recall
Trainer note from Bonnie : Hi Ben, I am so pleased that you are getting great results, keep up the good work!
See more reviews for Bonnie 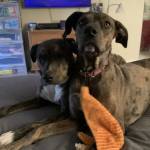 Nicole N Commerce City, Adams, Colorado | February 12 2021
This is my second review for Holly Denton and Bark Busters. When I started on this journey of training my dogs and met with Holly that first time, I have to be honest and say I was skeptical. Especially when Holly explained the training. But Holly assured me that with consistency and practice, I could change my dog's behavior and have "normal" dogs (my words). Mind you, I was at the point of surrendering both dogs because of bad behavior. Remington is a Treeing Walker Coonhound/Catahoula Leopard mix. He's a jumper and super hyper. Weatherby is a Great Dane/Lab mix and although very sweet, she emulates a lot of her brother's bad behaviors. So saying I was frustrated is putting it mildly. Aggressive/protective behavior when anyone came into my home. Barking at the door. Food aggression. You name it, my dogs did it. Let's jump forward 3 months. After following all the steps outlined by Holly, my dogs now are calm!! I recently had to have the plastic flaps replaced on my dog door and when the two gentlemen walked into my home, my dogs did not attack like they used to. I asked the guys to just stand there for a moment so my dogs could get a good sniff. Once they were done that, I commanded them back to their beds, and off they went. For the 30-45 minutes the guys were in my house, the dogs never bothered them once! As they were leaving the owner of the company stopped and said to me he had NEVER been in a home with dogs so well behaved. I told them that I had been training them and he told me that whatever I was doing with the training it was remarkable and to keep it up. If that didn't cinch my love of Holly and the Bark Busters training methods. Holly stopped by to do some outside walking training with me and she was amazed at how well behaved the dogs were compared to the first time she met them. No barking, jumping, or growling at her. They listened to commands and were sweet and lovable. I can't believe the difference Holly and Bark Buster's made in my two dogs. Oh, I know that it was partly me and following all the training steps but I am so happy I reached out and contacted Bark Busters. Permalink
Bark Busters dealt with Aggression, Barking, Hyperactivity, Jumping up, Pulling, Separation anxiety, Sibling rivalry
See more reviews for Holly and Scott

Bonnie O Nashua, New Hampshire | February 12 2021
I can't praise Kayla and Randy highly enough! My lab/Newfie pulled me down the street and was out of control with other dogs on leash. In one lesson, I had my sweet gentle Luna back, both inside and outdoors. They offer easy solutions that I worked on and I know I can call them whenever I need additional advice or encouragement! Thank you so so much, don't hesitate- hire them now! Permalink
Bark Busters dealt with Aggression, Barking, Hyperactivity, Jumping up, Pulling
See more reviews for Kayla & Randy 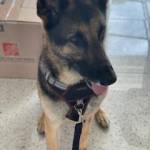 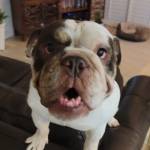 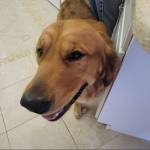 Mike D upper marlboro, Maryland | February 12 2021
Can't recommend Bark Busters enough. So professional and really amazing. Kelly turned my Thor's attitude around and made her so friendly. She was not very fun on walks and was not friendly. Now she has a much better attitude I love taking her out and she is much better socially. If you need a trainer look no further. Permalink
Bark Busters dealt with Aggression, Puppy management, Separation anxiety
See more reviews for Ben and Kelly

Lisa P San Francisco, City and County of San Francisco, California | February 11 2021
Karen is an incredible dog whisperer! She just has to enter the room and my daughter's puppy turns into a little angel....and stays that way long after she is gone. Karen offers wonderful advice to overcome any behavioral issue you might be encountering - demand barking, counter surfing, separation anxiety, and more. Her techniques are easy to implement and immediately effective. She is a fabulous resource and has made the whole process of rearing a puppy manageable and enjoyable. It is so helpful to have one person that you can contact for tips as new issues come out. I am confident that Murphy will develop into a well-trained companion for my daughter! Permalink
Bark Busters dealt with Barking, Chewing, Jumping up, Pulling, Puppy management, Recall, Toileting
See more reviews for Karen and Adam