Izzy A Denver, Denver, Colorado | June 03 2022
OMG Scott is AMAZING! I initially sought out a trainer as my elderly dog who is 14 years old, who was used as a bait dog before I adopted her, is aggressive when she sees other dogs. Like seriously, she can spot them from a mile away and will even growl, jump, and lunge when she sees them on TV. I contacted Bark Busters-Scott, as I was DESPERATE. We could not go on one normal walk EVER, without her growling at other dogs and wanting to lunge, jump and pull on the leash every time she spotted one from far away. While on walks I can only describe it as her walking me, instead of the other way around. When I called to set up an appointment for her, I was told Scott could take me but not until the end of July, and admittedly I was disappointed as I was just SO DESPERATE for help with her. When he was told of our situation he was able to move his schedule and booked me for the 3rd of June instead. Within the first 10 minutes I noticed a huge improvement, not only with my dog Jaz, but mainly with me as I am not usually a very authoritative person. He helped me SO QUICKLY after starting our session. I liked that we practiced in doors before even heading outside to try to attempt to go on a walk. I was FLOORED once we walked outside and she didn't even bat an eye at other dogs while walking at the lake. My jaw dropped and i'm pretty sure its still on the floor, because my dog has never EVER been as attentive and in sync with me throughout the four years i've had her. I am excited to work on homework with her, because if she was able to listen, stand by my side, and not lunge, growl, pull on the leash within 20 minutes of the session, I cannot imagine what consistent practice will do. I have nothing but great things to say about Scott. I am floored!!! If you are on the fence about it, it is worth EVERY PENNY and you should call immediately to book their services! Permalink
Bark Busters dealt with Aggression, Other, Pulling

Ti S Denver, Denver, Colorado | April 21 2022
Scott helped save my relationship with my puppy and made me into a dog lover!! I never had a dog and finally decided to get a puppy because my sister did. I hated being a dog mom! I didn’t understand my dog, he brought stress and anxiety to my already chaotic life. Where was this “man’s best friend” and “dogs will comfort you” stuff people talked about?! I didn’t get it and I had 3 back up plans of people who said they would take him….enter Scott I literally called Scott crying one morning and said I hated the puppy and I was going to give him up. Scott responded instantly and was at my house that day!!! His purpose was to save my relationship with my puppy and to train me. It worked! It took a few visits and phone calls (and yes, I cried a few more times), but I still have my gorgeous pup. I learned how to communicate with my dog and how to create a positive relationship with him. Scott and Bark Busters really know what they are doing. Permalink
Bark Busters dealt with Aggression, Barking, Chewing, Digging, Jumping up, Pulling

Carol C Arvada, Jefferson, Colorado | March 26 2022
Scott was so amazing! The first time he came to help with our two pitbulls it was to stop barking and listening to commands on the first time. It was a miracle I could have kissed him (?) but it wasn’t professional. I was so excited and pleased by how fast and quick they picked it up. But the most important result was helping me and educating me to know that they're very loving. I learned the dog language for the first time. Lol. It has been so educational and rewarding for our Pits, the family and myself. I so appreciate Scott and his knowledge. Thank you Scott. Permalink
Bark Busters dealt with Aggression, Barking, Chewing, Recall, Sibling rivalry

Cheryl F Denver, Colorado | February 10 2022
After doing some online research, we decided to work with Scott on some behavioral issues for both our 14 year old dog and 7 month old puppy. They were barking aggressively at the door and visitors, lunging at other dogs on walks, begging at the table, licking dishes in the dishwasher, and the pup had begun to dig and chew sticks in the yard. Scott came over for about 1.5 hours last Saturday for our first session, and it has already made a WORLD of difference! They wait for us to let them approach guests, respect us and our commands regarding food and barking, and we even were able to start walking training with them that first day! I cannot recommend Scott and Bark Busters enough. It is more training for you, the owners, than it is for the dogs. Scott also made some dietary recommendations that we are looking forward to trying. If you are considering making the investment in Bark Busters -- DO IT! Permalink
Bark Busters dealt with Aggression, Barking, Chewing, Digging, Jumping up, Other, Pulling, Puppy management, Sibling rivalry 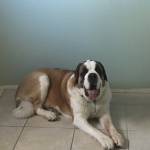 Glenda C Westminster, Colorado | December 09 2021
I am so happy with the behavioral training that Scott has provided. My 160lb Saint Bernard was fearful of strangers; other dogs; and the vet. This manifested itself in excessive barking and aggressive behavior while out in public, having people at the house, and visiting the vet. Almost immediately after working with Scott, Hubba gained confidence, and began to change. One day we were working in the front yard and Hubba was off leash with us. Suddenly the FEDEX guy stopped, grabbed a package and came running up our driveway to deliver the box. I was surprised as I didn't see him. Hubba saw him and came over and stood my me and watched. No barking, no chasing, no aggressive behavior. Thank goodness, that could have been a disaster. A few month's later, Hubba had his annual wellness exam at the vet. Before training, the vet couldn't even put a stethascope on him to listen to his heart. This year, the vet got a blood draw, gave shots, trimmed all his toenails, listened to his heart, and looked in his ears, and eyes. It was a miracle! Currently we take our daily walks and have people over to the house without incident. I have even had a stranger comment on how well behaved my Hubba is. Permalink
Bark Busters dealt with Aggression, Barking

Matthew F Denver, Colorado | September 07 2021
Scott Schwab at Bark Busters has our little guy back on track! After only a week, we are seeing drastic improvement with our dog, Alfie, a Havanese who has always struggled with anxiety, leash aggression, and incessant barking. Now Alfie follows commands, stops barking when we ask him to, and best part, he is walking like a champ. We're no longer embarrassed to walk him down our street and past other dogs. We are very happy with Alfie's progress so far, and we can't wait to see where he is in another week or two. It's really working! Permalink
Bark Busters dealt with Aggression, Barking, Hyperactivity, Pulling, Recall, Separation anxiety

Shelly M Denver, Jefferson, Colorado | June 10 2021
Scott quite literally changed our quality of lives for the better. We rescued Dash at about 9 months and then Dash started exhibiting some aggressive behaviors around 2 years old. We could not have people over our house. He could not play with other dogs. He would lunge at dogs when we went for walks. He had one aggressive incident that made us consider what we need to do with Dash because we weren't able to live our lives and we were afraid he was going to bite someone. We were honestly hopeless. However, the method Scott uses helped our dog almost instantly. I loved that he trained us (the owners), and then we were able to train our dog. Usually it's not the dog, but the dog owner that needs training on how to communicate with the dog better. Scott did just that. Dash has become much more submissive to us (or at least feels that we are in charge now and he doesn't need to protect us from everything). We can now easily have visitors come to the house with very little stress, and walking on the leash has become more enjoyable with less pulling. Even the way that Dash interacts with other people and dogs has changed; he seems much more relaxed and we haven't had any more scary aggressive incidents. You definitely still have to be willing to put in some work, but it's worth every penny! We are very thankful for Scott's training - we now feel that Dashy is a very good boy. Permalink
Bark Busters dealt with Aggression, Pulling

Roberta D Lakewood, Colorado | April 29 2021
Scott is a miracle worker! My 4 year old Cocker Spaniel was a barker and a howler. Notice I said WAS! After one visit I truly can say that behavior is gone. Ruby and I loved Scott. Permalink
Bark Busters dealt with Barking

Don and Ronnie M Arvada, Colorado | March 18 2021
We just had our introductory session with Scott. To say he is the Dog Whisperer is an understatement. The change in responsiveness we see from Nala after only an hour and a half of talking to Scott and working with Nala is AMAZING! Walking Nala on leash was so stressful because she would lunge, bark, and escalate into an all out screeching fit if she saw any other animals while she was on leash. She exhibited the same behavior if she saw other animals through a fence or through a window. Scott's technique is already working to redirect and calm her. We can't wait to keep working on the items he taught us and continue to see improvement. Permalink
Bark Busters dealt with Aggression, Barking, Other, Pulling

Mikayla M Evergreen, Jefferson, Colorado | December 14 2020
My first session with Scott was amazing! I have a very active and smart German Shepard/husky pup. While she is an amazing dog she had some bad habits I thought she would never grow out of. Within 10 min of working with Scott, Luna seemed like a completely new dog. Luna would lunge, pull, and drag me on every walk;even just to go out for potty. I tried EVERYTHING to help fix this, from training collars to training harness’s to prong collars to flat collars. After just 5 min with Scott,Luna was walking by my side or behind me the whole time!!! He really helped me understand how to communicate with Luna and give her the guidance and leadership she needs. After about a week of practice she just seems to get better, even my friends comment on how much better she is with jumping up, mouthing hands and of course pulling on the leash. She will walk with me or behind me even without the noise collar Scott gave us. I would recommend any dog owner to hire Scott, trust me when I say even the best dogs have room for improvement. I am now very confident I can have Luna trained to be off leash and a working pup thanks to Scott! Permalink
Bark Busters dealt with Hyperactivity, Jumping up, Pulling, Puppy management, Recall