American Pit Bull Terriers are highly adaptable but do require proper socialization and education because of their power and varying levels of aggression towards other dogs. This trait rarely extends to humans, however, and their loyalty, stability, and love of children makes them an extremely popular family dog. 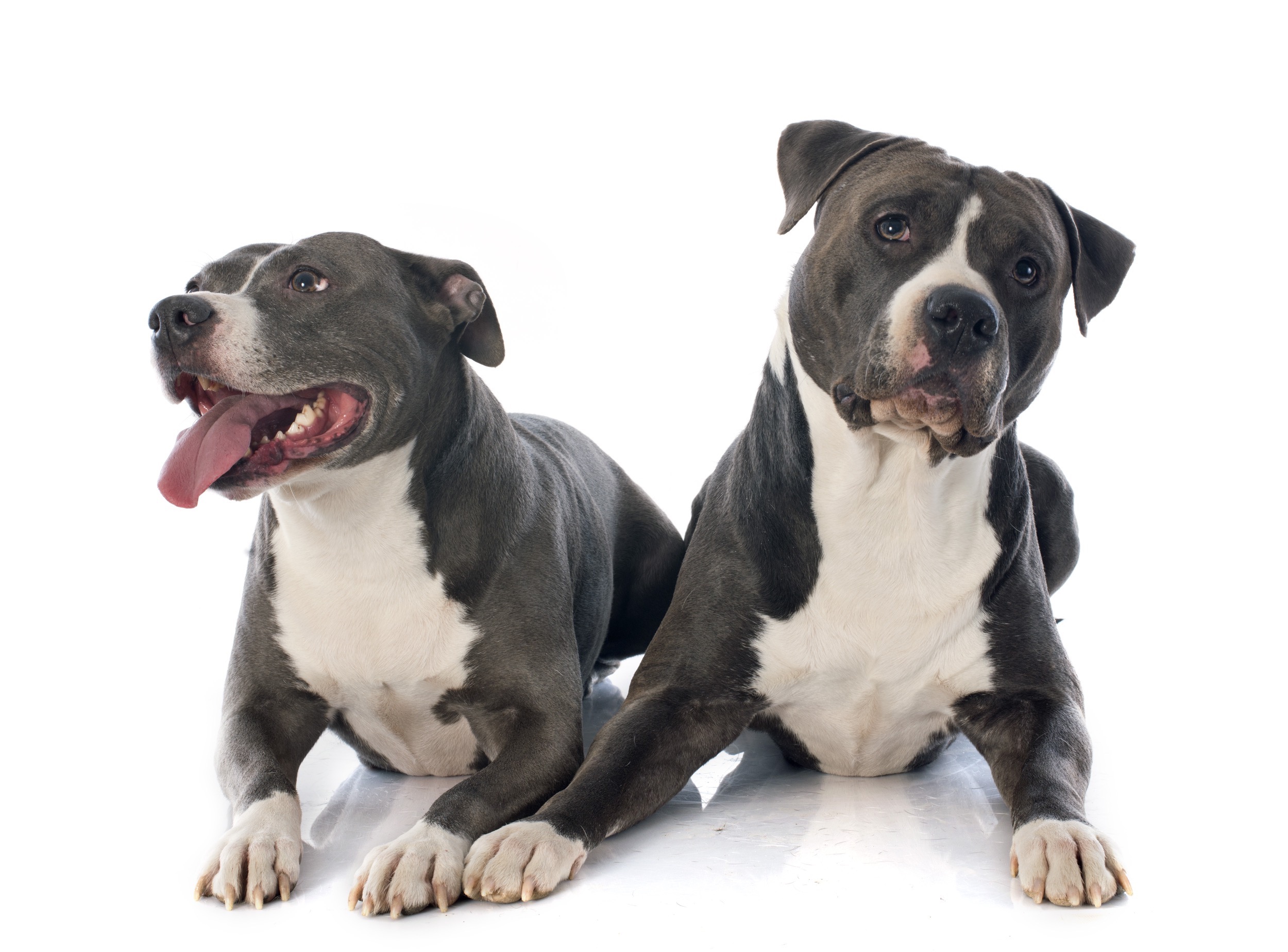 The American Pit Bull Terrier is medium-sized, solidly built, and possesses a smooth, well-defined musculature. The United Kennel Club guidelines specify a broad, flat skull and wide, deep muzzle, along with a relatively short tail and small- to medium-sized ears. On average, the breed is more prone to hip dysplasia, but breeding has helped mitigate the problem

American Pit Bull Terriers come in all colors and patterns except merle (also known as dapple). The most popular colors include:

The American Pit Bull Terrier originates in Europe, where English, Irish, and Scottish breeders began crossing Bulldogs and Terriers for blood sports, including bull and bear baiting. The Pit Bull needed strength, determination, formidability, fearlessness, agility, and tenacity – all of which became characteristic of the breed. 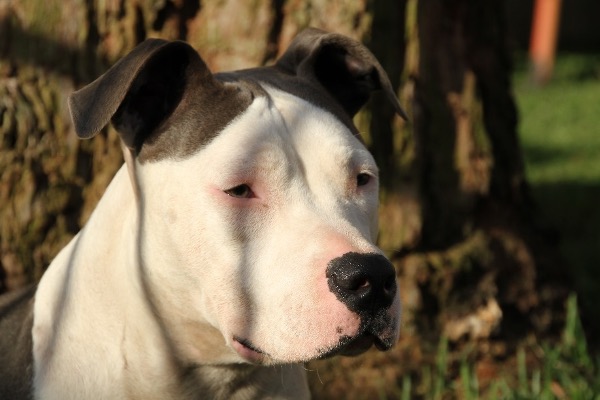 Immigrants brought the Pit Bull to the United States, where farmers and ranchers harnessed its many talents for use around their properties. The breed’s sweet, loving way around people did not go unnoticed, and farmers began bringing Pit Bull Terriers into their home, where they became “nanny dogs” because of their gentleness around children.

Pit Bulls are confident, outgoing, and love life. These loyal, trustworthy dogs are perfectly content to laze about, but will have bursts of energy when it’s time for a toy, walk, or other activities with their families. Their zeal and desire to please is contagious, and they are great around children – their love of humans, however, means they are not a great choice as guard dogs!

Because of the breed’s agility and intelligence, Pit Bull owners should have proper fencing at home to avoid any acrobatic escapes. The breed can also be aggressive towards other dogs, so early, consistent training is a must to avoid future behavioral issues at home or out and about. 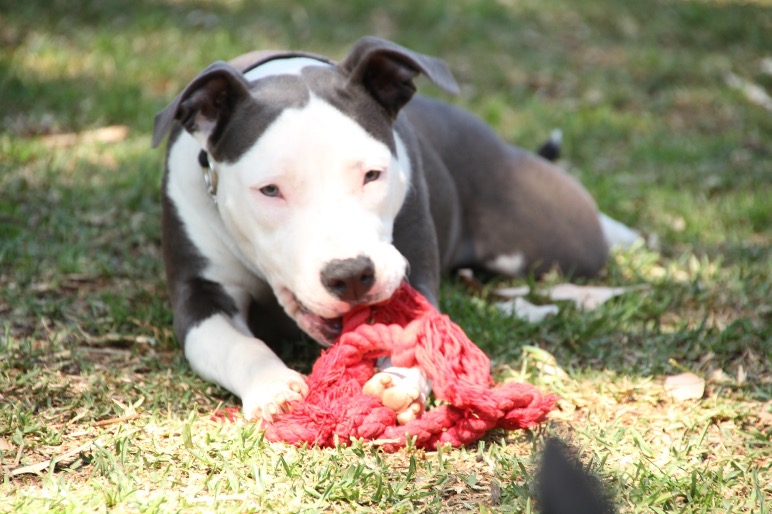 Pit Bulls have short, low maintenance fur coats that tend not to retain bad odors. Baths are recommended once a month but can be as infrequent as every six months. While daily brushings are not necessary, most Pit Bulls enjoy them, and they are vital for achieving a shiny coat by spreading natural oils and removing dead skin. 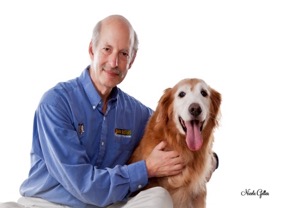 Pit Bull Terriers have an undeserved reputation for being dangerous, aggressive dogs. The vast majority are sweet, wonderful, and make great family pets. Like every dog, they need an education to learn how to fit into our lives, but they are not the fearsome monsters that many people believe. When I think of Pit Bulls, I always remember a big, imposing-looking four-year-old named Tank.

The couple who called me owned an auto repair shop, where they and Tank spent their days. Tank had started growling at everyone (including them) and they were worried that he was going to bite someone. The final straw came when Tank growled at them when they went to give him his dinner.

I agreed to meet them at their shop, and when I arrived, I noticed Tank was chained at the far end of their lot. I needed to gather more information before developing a plan for him; I asked when they got Tank (when he was a puppy) and what he was like when they adopted him (always playful and very affectionate). I asked when he started growling at everyone and they told me that it was after they decided to make him their night watchman, leaving him at the shop at night to protect it. I asked if he had ever been protective before and they told me that, prior to his new duties, he had always been friendly to everyone.

I realized what had happened: Tank, who was a sweet, gentle dog, did not understand why he was being left alone at night at the shop – he was feeling confused, scared, and stressed. To test my theory, I asked if his owners if they had any of Tank’s toys around. They found one of his balls and handed it to me. I asked them to get Tank and walk him around a little bit. Every time they started towards me Tank started growling and would get stiff. The third time they started towards me I started to bounce the ball.

Tank’s demeanor changed immediately: he stopped growling; his mouth, which had been clamped shut, opened; his eyes began to soften. I then asked them to drop the leash. They hesitated, asking if I was sure, and I told them I was positive. They timidly dropped the leash and I bounced the ball toward Tank. He pounced on it like a puppy, then brought it right back to me with a low wagging tail. I tossed it again; he brought it back enthusiastically. I did this a couple of more times, then handed the ball to Tank’s owner and told him to play with him.

While they played, we talked. I found out there had been some break-ins at nearby businesses, which was why they had been leaving Tank at the shop at night. Tank looked intimidating, but his temperament wasn’t suited to being a guard dog – instead, his stress was causing him to act out, just like a person being put in a situation they are not equipped to handle.

Dogs are social creatures, and in the wild they will ostracize sick or injured pack members who are no longer assets to the group. Tank’s canine instinct was telling him he was being ostracized by his pack (his owners) when they left him alone at night, but he was also being fed by them to stay alive, which wouldn’t have happened in the wild. This contradiction left him confused and stressed.

I suggested a couple of actions for the couple. First, I advised they fire Tank as a guard dog and get a security system to protect the property instead. Second, I suggested they instead make Tank the customer greeter, which was a better fit for his personality. I left confident that he would go back to normal with these changes.

I returned a couple of weeks later and was happy to find they had taken my advice. I was greeted by tail-wagging Tank, slobbery ball in his mouth, happy as could be. I also noticed the addition of newly mounted security cameras – Tank had been relieved from his guard duties and was thriving in his new, more friendly role!

Fortunately, Tank’s situation had an easy solution and a happy ending. If your dog is showing signs of stress, call your Bark Busters® trainer as soon as possible. Bark Busters trainers are experts at understanding dogs and their behavior. Once we identify the underlying stressor(s), we can develop action plans to mitigate the issues – and lead the way to happier dogs and families. 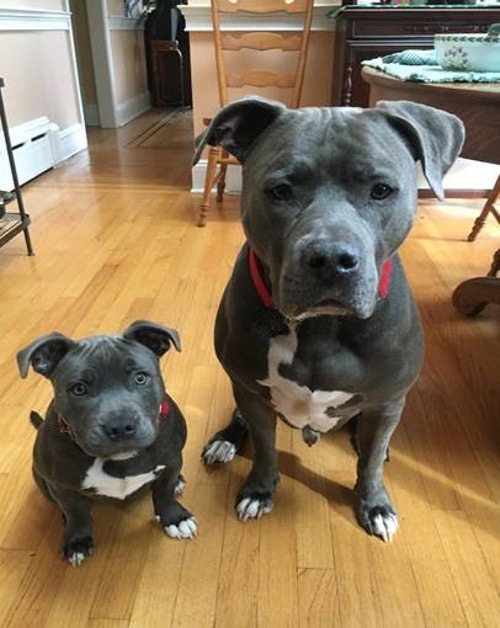 We are standing by to help you develop a consistent, compassionate approach to good behavior for your Pit Bull. Learn more about our services and schedule an appointment with one of our trainers today! As previously mentioned, early education is important. Making sure your Pit Bull Terrier walks properly on a leash is an important exercise. If your dog pulls on the leash, it can be damaging its skeletal frame. You should always start this training in the home and start with short walks and make them fun and educational. No need to go for long walks while educating.

Games to Play with Your Pit Bull Terrier

The Pit Bull Terrier is an energetic athlete who needs a lot of exercise and free play. Taking your dog for long walks & hikes is great for their wellbeing. A great interactive toy is The GameChanger® by Bark Busters®. Not only is this toy safe (made of FlexaPure - durable non-toxic PBA-free polyurethane material), but it stimulates a dog’s natural desire to chew. You fill the toy with some small treats, and your Pit Bull Terrier must decide how to get the treats out through the small holes. Entertainment for hours!