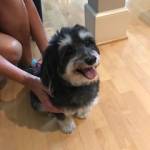 Kenny E Fort Myers, Lee, Florida | December 26 2018
Patrick is an excellent trainer. He really knows how to make training techniques relatable and easy to understand. He has a vast knowledge of communication skills with animals, and I would highly recommend him to anyone who is in need of dog training. Permalink
Bark Busters dealt with Recall
See more reviews for Patrick 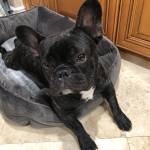 Stacey D Boca Raton, Palm Beach, Florida | December 26 2018
We have had many dogs over the course of many years. We purchased Romeo, an adorable french bull dog when he was 11 weeks old and we soon came to find out that he had pnemonia and was in generally bad shape. He did get better but we found that as he got older (about 6-7 months) he displayed dominant behavior complete with growling and snarling and even snapping at both my husband and myself when he didn't get his way or when he decided that one of us was his personal property and the other dare not approach. I was skeptical at first as I had worked with other trainers at various times with other dogs that I previously owned and was not impressed. Marc came in and just had Romeo and my eight year old dachsund Lucy reacting in a positive manner literally within minutes. In order for change to take place you must follow their instructions which at times is not easy but the results are so worth it. Instead of an aggressive dominant dog we have an adorable nine month old frenchie as well as a much more obedient and less bossy dachsund. We are so grateful to Marc and Karen who also worked with us. If not for them we may have had to surrender Romeo as we were afraid that we would get bitten or worse. Thank you from the bottom of my heart! Permalink
Bark Busters dealt with Aggression, Barking, Jumping up, Pulling, Separation anxiety, Sibling rivalry
See more reviews for Karen and Marc

Doctor C Naples, Florida | December 25 2018
Our two small dogs are very full of character and not easy to train but we were amazed at how quickly Colin and June managed to control their behavior. Amazing! We would definitely recommend them to train our friends' dogs. Permalink
Bark Busters dealt with Aggression, Sibling rivalry
Trainer note from John and Elizabeth : Two rat terriers now enrolled in our Gold Program (Guarantee of Lifetime Support).
See more reviews for John and Elizabeth 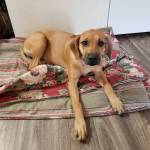 Leah P Cumming, Georgia | December 25 2018
***LONG REVIEW BUT WORTH THE READ*** This is my sweet, rowdy, rambunctious, and very demanding pup Rhodi! As a first time puppy owner, I just wanted to keep her happy. I let her get away with a lot! I quickly realized that I was not in charge of her but she was in charge of me. What I thought was being sweet was in Rhodi's mind "I can do whatever I want because I won't be punished for it." She would chew any object she could find, bark at me constantly when I wasn't doing what she wanted, would not listen to me when I would call her name, jumped on me and other people, tried to escape out the front door, and peed in the house. I watched videos upon videos but nothing helped! I was doing research on dog trainers and the first thing I thought was "this is so overpriced!" As a young college student with a rowdy dog, I was determined to find the best price with the most qualified trainer and I did! Bark Busters and specifically Cody are the best thing I could have done for both me and Rhodi. I was really nervous about having someone in my home "telling" me how to train my dog, but Cody TAUGHT me. If there was something I was struggling with, like leash training, he showed me an alternative way for me to get her to listen to me. The thought in my mind was "wow, he's not making me do it this way because it's the right way, but he found me a way that was Rhodi's right way I could do confidently." Cody was validating my feelings about not wanting to hurt Rhodi's feelings and continued to talk to me about ways that would not harm my dog or hurt her feelings. Simply being able to "talk" to Rhodi in a way she could understand that I was in charge and that she would still be safe and okay was the goal. In a matter of 2 hours Rhodi was trained! Cody did his job and now it's my turn to do mine with her by following through with the keys to success only Cody could have given to me. Permalink
Bark Busters dealt with Chewing, Hyperactivity, Jumping up, Pulling, Puppy management, Recall, Separation anxiety, Toileting
Trainer note from Cody Murphy : Thank you Leah it was a pleasure working with you guys!
See more reviews for Cody Murphy 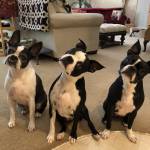 Lori S Vero Beach, Indian River, Florida | December 23 2018
Marc was so knowledgeable and able to give me examples to explain “dog language”. I added two dogs to a pack of one which was fine for four months. I contacted Bark Busters the day after a bite occurred! That could NEVER happen again! In three hours Marc was able to train me, in numerous situations, how I tell my dogs what is allowed and what is NOT allowed. My three Boston Terriers stopped jumping in the first hour. I was amazed. Bark Busters knows their job! Their techniques prove themselves in a matter of hours. Thank you Marc for an amazing three hours with a lifetime guarantee! Sold! I am forever grateful, Lori S. Permalink
Bark Busters dealt with Aggression, Barking, Hyperactivity, Jumping up, Recall, Sibling rivalry
See more reviews for Karen and Marc 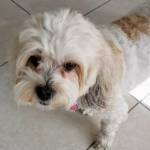 Deitra K Boynton Beach, Palm Beach, Florida | December 22 2018
Amazing results. Everyone who has had contact with Zoe has commented on the fabulous change Permalink
Bark Busters dealt with Barking
See more reviews for Karen and Marc 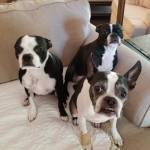 Lori S Vero Beach, Florida | December 22 2018
I have three dog's which is my challenge but Marc was awesome showing me how to be the alpha all the time. Marc's Bah is way better than mine, I will practice. This is an amazing system. I am impressed with Marc and his instructions. Permalink
Bark Busters dealt with Aggression, Barking, Hyperactivity, Jumping up
See more reviews for Karen and Marc