Carrie M Gibsonton, Hillsborough, Florida | June 24 2022
Joanne has helped us so much! Loki is a 10 month old giant schnauzer with so much love and energy. We just needed help to focus his love and energy appropriately. Joanne has given us the tools to have a happy and fulfilling life with our beloved Loki. Permalink
Bark Busters dealt with Barking, Jumping up, Pulling, Puppy management

Ninoska F Valrico, Hillsborough, Florida | May 26 2022
I highly recommend Joanne Rice, she was a savior to our household! We have a Yorkiepoo with bad anxiety problems, and a Chorkie that barked nonstop and Joanne came to our home and we were amazed on how her direction helped us with their behavior. We learned do much from her and we now have things under control. Permalink
Bark Busters dealt with Aggression, Barking, Jumping up

Karen P Riverview, Hillsborough, Florida | May 14 2022
We adopted our 4 month old puppy and realized that he was going to be a a big fella especially since his paperwork initially had Mastiff. My husband and I agreed we needed to look into a professional trainer for our young pup now rather than later. After some research we found Barkbusters who directed us to our great trainer, Joanne Rice. From day one we saw an improvement in behavior. We enjoyed the homework too (it’s not just the trainer needing the direction). While we didn’t think our puppy was too naughty he did need training on commands to come and stay, go up and down stairs and many other commands as he wasn’t a great listener at times.. Joanne was patient and made the training process easy without overwhelming our puppy and us. Our puppy recently had a “moment” with our new furniture. One reach out to Joanne and she responded quickly with a reminder of a training tactic as well as toys that could assist us with the training to alleviate the behavior. We would definitely recommend Joanne for your dog trainer. She is professional, prompt, understanding, a great listener and patient. We can’t thank her enough. People comment all the time on how our puppy is so well behaved. In fact, I think we have a family member that was happy that our puppy was “not perfect after all” when he has the furniture incident. That behavior has been addressed and he is still our Shining Star! Permalink
Bark Busters dealt with Barking, Hyperactivity, Jumping up, Pulling, Puppy management, Recall, Toileting 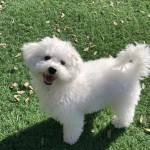 Beth B Land o’lakes, Florida | April 04 2022
Joanne is awesome! Everyone that meets us with our puppy says the same thing, “ is this the same dog?” He is very obedient, and listens well . Joanne follows up to make sure we are on track and to see if we need guidance Thank you!!!!! Permalink
Bark Busters dealt with Jumping up, Pulling, Puppy management, Separation anxiety

Lisa B Lutz, Hillsborough, Florida | March 23 2022
Joanne was AMAZING!! SO professional and gave us so much background information on the training prior to actually working on the training that it made the training make SO much sense. She worked on the things that we had requested and more. Left well written notes and homework for us that will be easy to follow. Would recommend her services to ANYONE! Permalink
Bark Busters dealt with Jumping up, Other, Recall

Glenda T Lithia, Hillsborough, Florida | December 04 2021
We used Bark Buster 15 years ago with our Dog that passed away. First thing we said when we decided to get a new puppy was that Bark Busters was a MUST. We were so fortunate to get Joanne. The first day with the help and training in sooo many areas (we were honestly doing everything wrong) was an amazing experience. Our puppy was out of control and we were afraid to try crate training. Joanne came and within a day and I am not exaggerating we have a totally different puppy. The first night he slept in his crate and goodness what a relief. We were sleeping and waking him up every hour at night so he would have any accidents. Now he goes twice a night and we SLEEP!! We could not and I mean could not have accomplished this without Joanne. The fee we paid for a lifetime coverage paid for itself THAT DAY!! And of course she trained us.. with on site help and pamphlets and instructions what to do everyday. Don't hesitate.. change your life and make your fur baby a happy baby with Joanne at Bark Busters. Thank you from the bottom of our hearts. ❤️ Permalink
Bark Busters dealt with Aggression, Chewing, Puppy management, Recall

Linda S Seffner, Florida | May 25 2021
Enjoyed meeting with Joann. She had some very helpful tips and information. Permalink
Bark Busters dealt with Jumping up

Kassandra P Lutz, Hillsborough, Florida | November 08 2020
I got a Doberman puppy in mid-April and was excited to bring the little thing home. By the time he was 3 months old, he had grown exponentially, and was turning into more than I could handle. Because of a lack of socialization options in my neighborhood (social distancing etc.), his destructive puppy behavior was starting to peak. I really needed help. He wouldn't sleep in his crate, he was still using wee wee pads, he was tall enough to counter surf, and would chew and rip everything up that he got his big paws on. I started reaching out for trainers in my area- I was desperate. Most wanted to board and train. Or their fees were too much. I needed someone skilled, reliable, knowledgeable about large breed dogs, who used ethical and safe behavior modification strategies. This is how I found Joanne. After TWO sessions with her, I have a new dog. He is now 7 months and approximately 70lbs. He is not perfect, but he respects me and listens. We have completely bonded and he is the typical velcro Doberman. Although he is still acting like a puppy in every way, we have made great headway in setting boundaries and creating a routine. For example, he sleeps every night in his crate. When the lights go out at night, I say "crate" and he runs right in. He even goes in there when he wants to rest. UNBELIEVABLE. He HATED the crate. He also now goes potty on demand. I take him to his favorite spots and say "go potty" and the deed is done. I can take mini breaks during the work day and he will go when I need him to. He is very popular at doggie daycare. They love him there. They report he gets along with all dogs- big, small, young, old. Counter surfing- gone. Treat stealing- gone. He respects my space and waits now for permission. He loves the training leash and chasing butterflies, and on our morning walk, I can jog with him sometimes so now I am getting exercise. I never thought these things would be possible. With simple strategies to keep him exercised, him busy with chew toys, socialized, and with me "thinking like a dog" and being consistent, every day is an awesome day with my Dobie. Thank you Joanne! HIGHLY RECOMMEND! Permalink
Bark Busters dealt with Aggression, Barking, Pulling, Puppy management, Recall 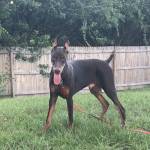 Kassandra P Tampa, Hillsborough, Florida | November 07 2020
Joanne helped me to learn how to communicate with my dog. Before meeting her, I was very frustrated, and did not know how to focus my dog's energy or keep him from being destructive. The skills and methods shared by Joanne corrected the troubling behaviors and increased my dog's quality of life. We were having issues with crating, toileting, excessive chewing, counter surfing- puppy behavior, but my dog is a Doberman-not typical puppy size so the urgency to curtail his behavior was important. Me being consistent has dramatically improved our mom/dog relationship and he is continuing to be a loving, jolly, silly and respectable dog. Thanks Joanne for your help! Permalink
Bark Busters dealt with Chewing, Hyperactivity, Jumping up, Puppy management, Separation anxiety, Toileting 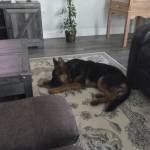